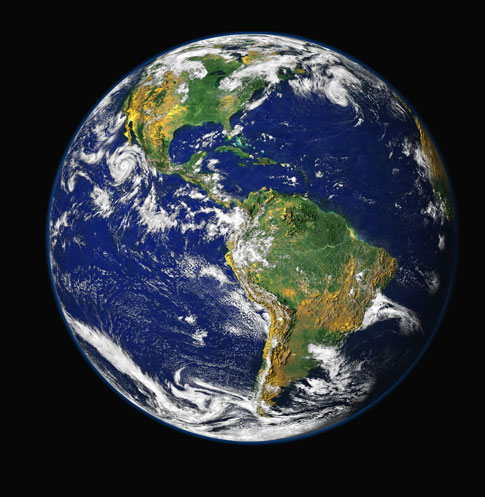 Accurate navigation ultimately depends upon knowledge of where you are on the surface of the Earth which, for simplicity we think of as spherical. (The Earth is approximately a sphere of radius 6371 Km, or 3959 miles. There is some asymmetry but we can ignore this here.) The globe is divided into sections in two ways known as latitude and longitude. To understand this a bit better you need to become an astronaut...

Imagine you are looking at the Earth from a point in space directly over the north pole (Figure 1). The planet looks like a circle with the pole at its centre and the equator at its circumference. Longitude is obtained by thinking of the Earth as a circle divided into 360 degrees, with 0 degrees at 12 o'clock, and clockwise going in the westerly direction. The lines of longitude radiate outwards from the centre (pole) towards the circumference. All lines of longitude meet at the poles. In fact, what you have done is to draw a series of imaginary circles around the surface of the planet so that they all meet at the poles (Figure 2). To create a standard reference point or zero, it was internationally agreed a long time ago that a line of zero degrees longitude would be defined to pass through the Greenwich astronomical observatory in London, UK. 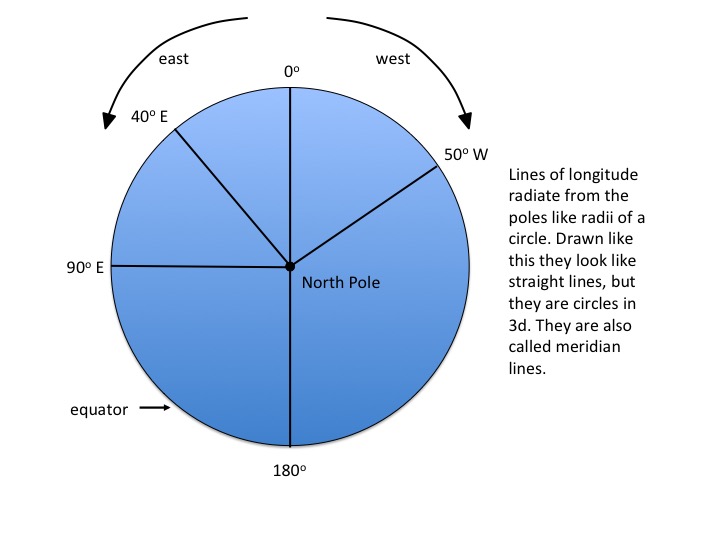 Because of the three dimensions of the Earth, the separation of lines of longitude varies depending upon your proximity to the pole. Imagine that you are now back on Earth and standing exactly at the South Pole. Take one step to the left. No matter which way you choose to do this you are walking north! So, it doesn't matter at all in which direction you face when you are standing at the south pole, you are always facing north. Now walk around the pole in a small circle. you could accomplish this in a few seconds and walk a mere one or two metres in doing so. You would have walked through all 360 degrees of longitude. 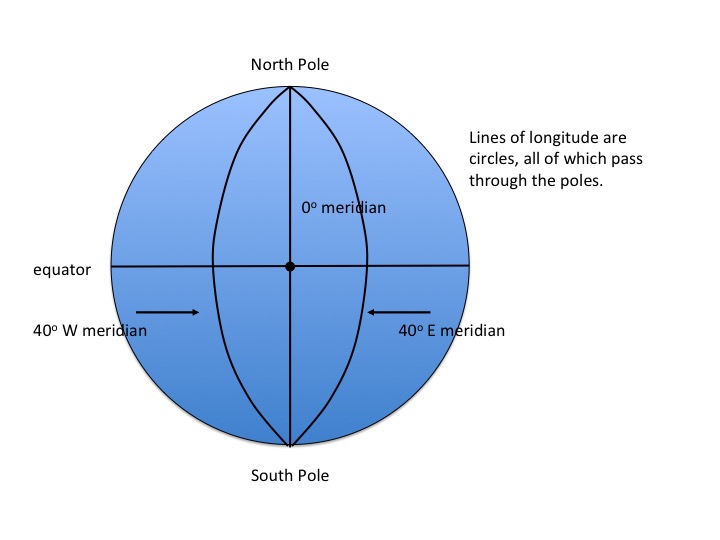 So what about latitude? Well, take another trip in your space rocket and imagine now that you are looking at the Earth with the equator straight ahead of you and crossing the circle of the planet horizontally like a diameter; the north pole is on the top and the south pole on the bottom (Figure 3). The north pole is a point 90 degrees north of the equator, and the south pole is a point 90 degrees south of the equator. Image that you draw a line from the centre of the Earth to the surface, so that the angle from the equator (we say the angle subtended) is 40 degrees. All points on the surface of the Earth that would fall on this line are at a latitude 40 degrees. If you now turned the planet so that the pole was at the centre of the circle once more, and the equator was at the circumference, the line of latitude would look like another circle with smaller radius (Figure 4). Thus, longitude is a series of imaginary parallel circles drawn with the poles at the centre and using the equator as the circumference. Note too that there is a latitude of 40 degrees north and also one of 40 degrees south. The diagram in Figure 3 shows the 40 degree north line and one at 20 degrees south. 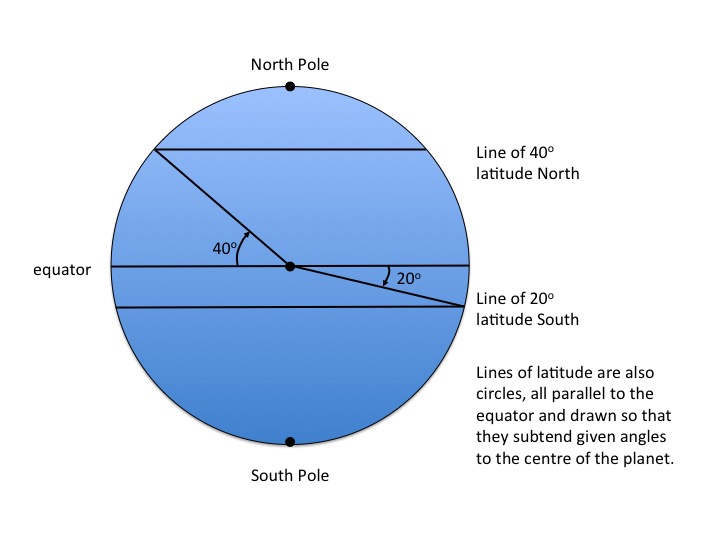 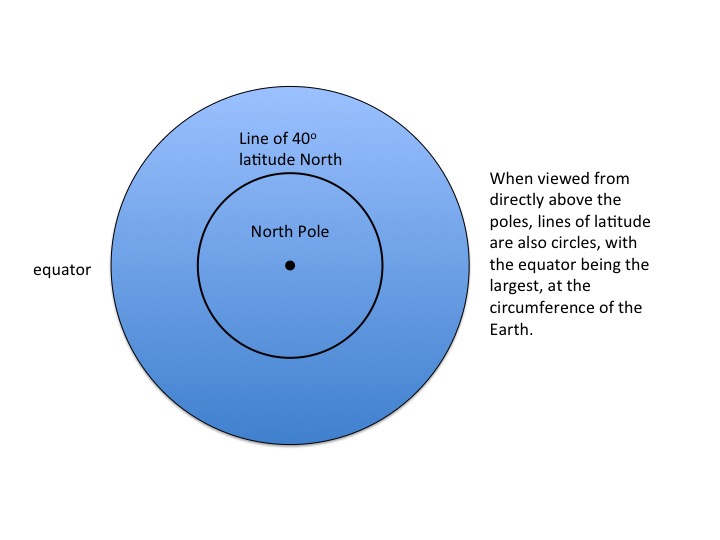 EXAMPLE OF CALCULATION WITH LATITUDE AND LONGITUDE

We can calculate the distance between two points using their latitude and longitude co-ordinates. However, there are some approximations involved, and we do need to take account of the latitude at which the calculations are made. For example, elsewhere in these pages, we have studied how Smeaton observed his own lighthouse on the Eddystone Rocks by looking at it from Plymouth Hoe. How can we calculate the distance between these two points?

Now, all that is necessary is to use Pythagoras to calculate the hypotenuse with these two distances as the sides of the right-angled triangle. Thus the distance from the Eddystone to the How, d, is SQRT [ (x2-x1)2 + (y2-y1)2 ] giving us the answer of 22.2 Km or 13.8 miles.

In this calculation we have assumed that (1) the Earth is perfectly spherical (2) there is no significant curvature of the Earth for the distances involved and (3) that the conversion to distance at longitude 50 degrees is linear over the distance involved. All of these assumptions are justified, but they might not be if the distances were much larger.