Optics are very heavy, large objects but we need to rotate them at fixed speeds so as to provide the characteristic signal that seamen will recognise as coming from this particular lighthouse. When you are designing a lighthouse you need to choose a light characteristic that is different from other lights in the vicinity. That way, when a seaman sees your light, he can count the flashes, measure the time and know that it is your lighthouse he is seeing and not another one further along the coast. Not only is your lighthouse telling the mariners that there is danger, but they can be assisted in their navigation because they know where they are when they measure your light against the compass.

In the picture below, you can see an optic that at first sight appears to be five-sided. Closer inspection shows that each of the five sides is made up of two similar panels. As this optic is rotated, a pair of flashes will come from each of the five sides, as shown in the diagram on the right. In fact, this optic is the top half of a giant double optic constructed by the Chance Brothers Co of Birmingham and installed in the Bishop Rock lighthouse (below) in 1887. This top part was removed from the lighthouse in 1991 during the automation programme to make room for an emergency light. The bottom half continues to provide the light from this lighthouse.

It was one of the largest optics ever made with a focal length of 1330 mm. It was 31 ft (9.5 m) to the top of its weather vane. Its 15 ft (4.6 m) high glazed section was positioned on top of a cast iron pedestal base. On top of the gun metal-framed lantern were steel rafters covered in thick sheets of copper that formed its roof. This was surmounted by a drum ventilator and weather vane. The light source was supplied by two eight-wicked Douglass oil lamps. Paraffin for these lamps was pumped from the service room below.

The optic consisted of 2 layered tiers of lenses. Each tier contained ten lenses set at a horizontal angle of 36 degrees and a vertical angle of 80 degrees. Each lens consisted of a central bull's eye optic with 17 ring prisms above and below. The two oil burners were positioned behind the optics, one above the other. In clear weather the lower burner would be operational and produce a 40,000 candle power beam through the optic. If the keepers could not see the St. Agnes light five miles away, they would use both burners when a beam of 230,000 candle power was available. The framework of the optical apparatus was specially constructed from a heavy steel section designed to resist the sudden shock of heavy waves hitting the tower. The duration of the light sequence was a 4.75 second flash followed by a 4.25 second eclipse, then another flash of 4.75 seconds ended by an eclipse of 46.25 seconds. 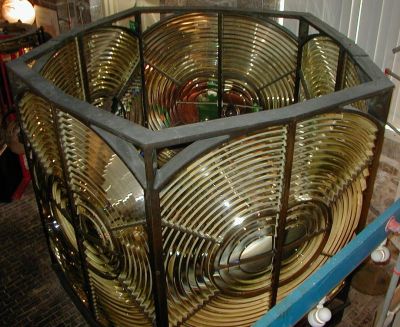 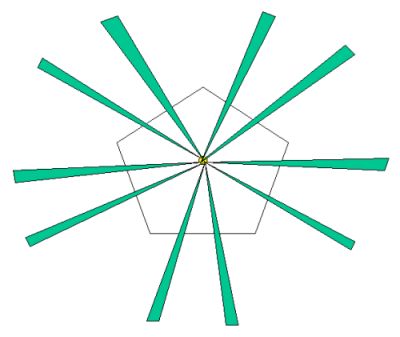 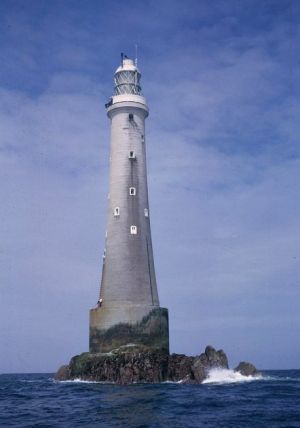 The Bishop Rock lighthouse, photographed before it had a helipad constructed on the top of its lantern. This is the lighthouse in which the optic above was installed. The lower half is still there, providing the characteristic of two white flashes every 15 seconds, abbreviated Fl(2)W15s. As we know that there are five sides to the optic, we can calculate that the optic takes 5 times 15 seconds, i.e. 75 seconds to make one complete revolution.