Pharology - History of Lighthouses in the British Isles - BR22 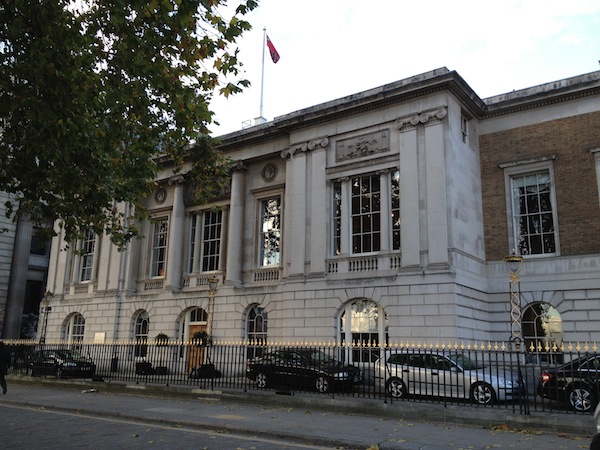 When the Corporation of Trinity House was first formed, its base was at Deptford, but first it moved to Ratcliffe and then, around 1618, it moved to Stepney. But luck was not something that the Corporation could claim for the properties it used as headquarters. In 1660 the Corporation moved to Water Lane and six years later the building was destroyed during the Great Fire of London. Rebuilt in 1667, the building lasted for only 47 years before it too was burnt to the ground. Another property was built on the same piece of ground, but by 1793 it was in such a bad state that it was handed over to the Admiralty who decided the best answer was demolition.

Trinity House now stands on Tower Hill, a property designed and built in 1793 by one of its own architects, Samuel Wyatt. The exterior of the building clearly shows the character of the Corporation. Puff-cheeked cherubs adorn the facade and hold in their hands anchors, compasses and marine charts. The whole building is constructed from Portland stone with Doric columns and pilasters. There is a very large basement for storage of historical records; the ground floor contains offices whilst the upper floor consists of grand apartments where admission is by invitation only.

Once inside, a double staircase of solid Portland stone guides the way to a half landing with a wall decorated with a large oil painting. The staircase then branches left and right and meets on a central landing lined with ornaments, pictures and sculptors. The ceiling of the grand board room was painted in 1796 by the French artist Riguand and depicts the prosperity of England as it combines navigation with commerce.

To describe this wonderful ceiling is best started with the British Neptune who is advancing in triumph, surrounded by sea¬horses and attended by Tritons. In one hand he holds a trident and on his other arm is the shield of the United Kingdom. The regal march is protected by cannons and other items of war with unusual angels hovering around waving the Union Jack. On the other side of the ceiling Britannia sits on a rock receiving produce from many nations. Sea nymphs seem to be struggling under the weight of their presents as they approach the seated Britannia. There are also seamen laying out the fruits of commerce on the shores of England. To complete this extraordinary scene, children wave lit torches to represent the lights that encircle the English coastline.

Commerce and humanitarian scenes, and the display of Neptune alongside Britannia, would seem correct, but depiction of cannons and other items of war might be considered out of place in a House founded for the well-being of seamen.
As the blitz of London increased in intensity during the Second World War, historical records, documents and irreplaceable paintings were packed into protective crates. These crates were due for transportation to a safe location on the lst January 1941, but, once more, luck was not on the side of the Corporation because, on the night of the 29th December 1940, the Headquarters at Tower Hill received a direct hit from an incendiary bomb which destroyed nearly all of these treasures. When the war was over, Sir Albert Richardson, architect for the Corporation, was commissioned to restore the burnt-out Headquarters to its former glory. This work was completed in 1953 and officially re-opened by Queen Elizabeth II.

There is a slim ray of hope that some long forgotten records may still survive. Many of the records and Charters were ordered to be handed over to the Government of Oliver Cromwell in 1650-1 and have never been returned. Pessimists say that it is doubtful that these documents still exist as they were in the House of Commons vaults when the building was burnt down in 1834. Through the years of political turmoil, fires and bombing it is a sad fact that a very important part of the British lighthouse heritage has been lost, but perhaps, someday, someone will find some hidden boxes in the House of Commons which will bring to light more of this wonderful history of Trinity House.