Pharology - History of Lighthouses in the British Isles - Eccliastical Lights 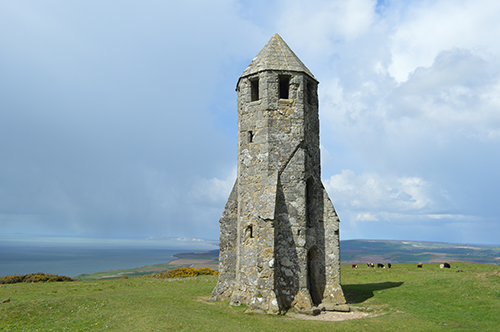 Shipwrecks were both good news and bad news, bad for the sailors and their families, but good for the people who lived nearby and who could benefit from salvage of the cargoes. Such windfalls often meant the difference between comfort and despair in lean times. Once seamen came to depend upon certain lights being shown, it was only a matter of time before unscrupulous rogues showed false lights to lure ships onto deadly rocks. The Cornish coasts, in particular, hold many secrets of wreckers and their deadly games. In the 14th century, piracy at the Bell Rock in Scotland is the focus of a tale in which a warning bell was established on the dangerous rock by the Abbot of Arbroath, but removed by the pirate to further his own evil ends. It is said that he perished a year later when his ship struck the same rocks because there was no longer a warning.

From medieval times to the beginning of the 17th century, the safety of seamen, which included showing lights, was a task that often fell to the caring people of the church. Indeed, the majority of early maritime lights were of ecclesiastical origin. One of the first recorded lights, established by a religious order in the British Isles, was at Hook Head in County Wexford, reputed to be the site where the monks of St. Dubhan established a fire beacon as early as the 5th century. Another report gives 810 as the date of establishment, but there is no doubt that the tower that exists there today is the oldest operational light in any of the four countries – England, Wales, Scotland and Ireland, and dates from 1245. It was reportedly built by the warden and chaplains of the monastery of St. Saviour Rendeuan. A lighthouse is said to have been built at Youghal in 1190 by Maurice Fitzgerald who put it in the care of the nuns of St. Ann's convent, which he endowed. In England, the earliest known light was a harbour light at Winchelsea on the Kent coast, erected about 1261.

Whilst monks may have tended to lights, not all were built by them. St. Catherine's oratory on the Isle of Wight was erected by a rich merchant to fight ex-communication by the Papal church. The merchant, Walter de Godeton, purchased numerous barrels of wine from the local wrecking community at St. Catherine's. Despite the principle of 'Custom and Descent', where salvage from shipwrecks was considered the lawful right of the people, the Pope considered that, because the wine had been destined for the Catholic Church, the salvage was an act of plunder and sacrilegious. In penance to the Church, Walter de Godeton was forced to build St. Catherine's Oratory to provide a 'chaunting priest' and to establish 'a light for the benefit of mariners, to be lit every night for ever'. From 1314 until the dissolution of the monasteries by Henry VIII in 1534, the family of Walter de Godeton kept the oratory lit.

One of the most famous medieval lights was exhibited from the top of the church on St. Michael's Mount in Cornwall. This light was established around the middle of the 14th century, with the church standing proudly on its island base off the fishing port of Marazion. Ecclesiastical lights were shown in Scotland too, the best known at Leith near Edinburgh from 1522, whilst the last known light erected by a religious order in Scotland was at Aberdeen in 1566 [Hague, 1975].