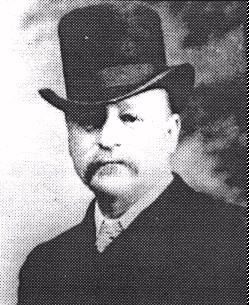 Once begun, the rapid growth in industrialisation of Japan had a very big effect on the number of lighthouses. In 1875 it was reported [25] that:

"Among various improvements which are now being carried out by the Japanese Government may be mentioned the studding of the Japanese coast with lighthouses for the benefit of navigation."

The fact that this was due to the remarkable efforts of one man goes largely unreported in Britain. The story of Japanese lighthouses is very much dominated by a Scot named Richard Henry Brunton, born on 26th December 1841. He began his career (as did many engineers of his time) working on the rapidly developing British railway network. Then, in February 1868, fulfilling all professional requirements, he was elected an Associate of the Institute of Civil Engineers. Two months later, the Board of Trade appointed him Chief Lighthouse Engineer for Japan (in the same way as Henderson was to China) in which manner he became the first foreigner to be hired by the new Meiji government. Brunton had become friends with David and Thomas Stevenson, the famous Edinburgh lighthouse engineers, whose recommendation must have played a key role in the appointment. It proved to be an inspired choice. Brunton at once entered upon a crash course in lighthouse technology in the Stevensons' office and visited many lighthouses and lightships along the coast of the United Kingdom obtaining a vast practical knowledge of their construction and working details. He also married.

It was at this time that the Japanese government, after much foreign lobbying, finally decided to promote foreign trade and open its routes to the West. The subsequent increase in shipping awakened the authorities to the possibility of a large increase in shipwrecks too. Thus the Japanese Government decided to build a network of lighthouses at strategic points along the coastline to protect shipping heading for Yokohama, Tokyo, Kobe and the newly opened port of Osaka.

Sailing in June 1868, with his new wife, and assistants, C. A. McVean and A. W. Blundell, he arrived in Yokohama about two months later. The Lighthouse Department to which Brunton was appointed was located in four acres of land in Yokohama, where workshops and store-rooms were erected. A mock-up three-floor lighthouse 12 m (40 ft) high was also built specifically as a training aid for the new Japanese lighthouse keepers that were to be recruited. Brunton used all of the methods that were available to him. Construction designs, light mechanisms, even working practices, were adapted from Stevenson and Company, but he also developed new techniques especially designed for structures that could be subjected to earthquakes.

Brunton embarked upon a programme that was to add thirteen new lighthouses and two light-ships to the newly established list of Japanese navigational aids by the time of his departure in 1876.

There were many difficulties to overcome and Brunton was noted for his doggedness and desire to succeed. A typical difficulty arose during the construction of the Inubo Saki lighthouse near the east coast town of Choshi. There was neither a ready supply of stone, nor of materials suitable for the manufacture of bricks. It is recorded that Brunton, assisted by his inseparable canine companion, initiated a long search to find the best materials for brick manufacture. With the master carpenter of Choshi and his men, Brunton set out to find the important mixture of soil and clay. For many days they searched along the banks of the Tone River. Finally they found the required materials at the village of Takaoka, over 50 km from Choshi. Once this had been achieved, the construction of the lighthouse was completed quickly. The inauguration of Inubo Saki lighthouse was on 15 November 1874. It is said that some fisherman believed the glare of the strong light would scare the fish away. However, it is also recorded that the Choshi fishermen made a record-breaking catch that year.

The building project was ambitious and required many skilled staff so Brunton established a training school, not only for the engineers and craftsmen, but for the lighthouse keepers who were so vital in making the lighthouses function reliably. This training school was eventually to develop into no lesser institution than Yokohama University itself.

During his first six months, Brunton met Thomas Blake Glover of Fraserburgh in Scotland, a man who also helped to open up Japan to Western ideas and trade. He contributed to the industrialisation of the country by introducing the first railway locomotive, the first mint, the first dry dock modern warships, and the first mechanised coal mine.

Brunton’s presence in Yokohama was having a profound effect on the life of the city as it came under the influence of this western way of doing things. His obvious skills were soon in demand for other projects too. He was asked by the Kanagawa prefecture government to help design and develop the central Kannai district of Yokohama. He began surveying the urban plan for the foreign settlement in September 1868. Construction was completed sometime around 1869 or the beginning of 1871. The subsequent development of this district still clearly reveals his legacy. It included the building of Japan's first western-style sewerage system and the laying of the first tarmac road using crushed rock, part of which is the 36-meter wide Nihon Boulevard, which runs for about 500 meters toward the harbour from Yokohama Stadium. Brunton was responsible for building the Yoshida Bridge - Japan's first truss bridge - and the second steel bridge in Japan. He also designed Yokohama Park the first western-style park in Japan.

Because of his experience in railway design, Brunton soon found himself consulting with the Japanese over the construction of its first railway. He recommended the building of a small railway between Tokyo and Yokohama to impress upon the public the advantages of rail travel. Work began in 1870 with the arrival of a Briton Edmund Morell who was brought in as engineer in chief for the new railway. Morell proposed that the government set up an agency to regulate the country's industrial development as a whole leading to the establishment of the Ministry of Public Works in 1870. He also saw the need to train Japanese to take charge of their own modernization and his suggestion resulted in the Imperial College of Engineering. But Morell was not to see the fruits of his efforts. At the age of 30 after only 19 months in Japan he died of ill health and his wife exhausted from looking after him died the next day. They were buried in the Foreign Cemetery in Yokohama with Morell's tombstone designed to resemble a railway ticket.

Construction of the railway, like the lighthouses, posed many challenges. For example because the proposed route from Shimbashi (Tokyo) to Yokohama ran through some land used by the army, an embankment was built that carried the track over water between Shiodome and the outskirts of Shinagawa. Eventually at a cost of 3 million yen the line was completed in 1872 and Japan's first railway went into operation. From the 1880s the rail system expanded rapidly, with new lines such as the Yamanote Line, which circled the capital region, and trunk lines such as the Tokaido and Tohoku lines being built. By the time railways were nationalized in 1906, a nationwide network was in place.

Brunton also supervised the construction of the cable for Japan's first government telegraph which was laid between the Tomyodai government offices in Moto-benten and the Kanagawa Courthouse, and which began transmissions in August 1869. The public telegraph service that commenced operations between Tokyo and Yokohama in December 1869 was also completed through arrangements that Brunton helped to make.

A Royal Navy vessel, HMS Sylvia, was obtained to accompany Brunton on marine surveying service. Orders were given to procure from England theodolites, quadrants and other drawing instruments to carry out the surveys and Brunton always emphasised the importance of mathematics to use these instruments satisfactorily. By November 1870 the Japanese had decided to create a school of mathematics and other cognate subjects and under Brunton's guidance a large building for the purpose was erected in Yokohama with a cohort of newly recruited Japanese teachers. Amongst other requirements, Brunton was asked by the Japanese to obtain two complete copies of the Encyclopaedia Britannica.

Brunton was to live in Japan for eight years from 1868 to 1876. Despite all his qualities and the contributions for which he is still remembered in Japan, Brunton passed into relative obscurity on his return to England. This pioneer and civil engineer, who not only brought lighthouses to Japan, but was the founding father of one of the world's greatest international trading ports and accelerated Japans drive towards modernisation, never achieved the recognition he deserved in his own country where he is now more or less completely unknown. He died in London on 24 April 1901. In 1991 on the 150th anniversary of his birth, his great contributions were marked by the erection in Yokohama of a memorial to him that reads:

Richard Henry Brunton was employed as a civil engineer by Japan's Meiji government from 1868 to 1876 during this time he made significant contributions to the transfer of modern civil engineering technology to Japan including the construction of over 30 lighthouses which greatly aided the establishment of foreign trade in Japan and the modernization of the port city Yokohama. This memorial stone was presented to honour Mr. Brunton's great works in commemoration of the 150th anniversary of his birth.