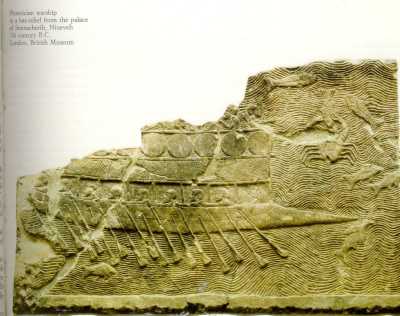 Fig. A16.1: A relief of an ancient Phoenician ship

To determine whether the Phoenicians were likely to have built the first lighthouses, we now turn our attention to their skills in shipbuilding and navigation. There is almost complete agreement that the Phoenicians were the greatest navigators of their era. This represents a time that spanned at least a thousand years from 1,200 BC, the date ascribed to their emergence as an independent people, and about 250 BC when, during the first Punic war, the Romans were learning fast due to the need to defeat the Carthaginians. By the time the Phoenician culture was in serious decline, the Pharos at Alexandria had been built (273 BC). It is therefore possible that they did produce the first lighthouses upon which later lighthouses were modelled. If so, the most likely sites would have been at Gadir or Carthage.

Although no Phoenician ships have been excavated, sufficient is known about them from documents and reliefs to be confident about their structures. Three types of ship are known. The first was a small craft with a prow in the shape of a horse’s head that was rowed by one or two men for short distances. The second was a merchant vessel that was the mainstay of the Phoenician activity over a period of a thousand years. The third was a warship. The merchant ships were hard to handle because of their design, which might loosely be described as the shape of a bathtub. They were large and of great capacity: a Canaanite merchantman in 1,200 BC is thought to have been able to carry loads of between 200 and 450 tons. They used square sails and were rowed in the absence of wind [9, 10]. The warship was lighter, propelled by oars with a full complement of fifty men and fitted with a ram. These fighting vessels were very successful in battle, thanks, not only to the good design, but also to the highly developed Phoenician seamanship. Only when the Romans had caught up in technology and fighting skill did the Phoenicians suffer significant reversals in battle. The Phoenician fleet is considered today to be the first naval power in history [9].

At least one author [11] believes that voyages consisted of coastal navigation where a series of short daily hops were made from one colony to the next, keeping the coast in view at all times. We should note that Herodotus [25] describes the way the Persian fleet kept near to the coast during its attacks on Greece. Artabanus told the Persian King Xerxes:

“So far as I know, there is not a harbour anywhere big enough to receive this fleet of ours and give it protection in the event of storms: and indeed there would have to be not merely one such harbour, but many – all along the coast by which you will sail.”

It is interesting to note that there are large areas of the Mediterranean where, thanks to high mountains, the land is visible. This is concluded from the spacing of Punic settlements at regular intervals of 20-30 miles along the coastline, consistent with the number of miles it was possible to travel each day. However, this argument is obviously wrong when one considers the Phoenician settlements in Sardinia, Sicily and Ibiza, places that are not reached by short daily hops. Routes were certainly kept close to the land whenever possible and maximum use was made of shelter in protected waters behind promontories or islands. Few voyages took place in winter when visibility was poor or the weather bad, and winter sailing in the Mediterranean was not widespread until the 16th century. It has been calculated that a voyage from Tyre to Gadir would last about 3 months and, allowing for the need to winter at the destination, it would be almost a year to complete the return trip [9]. No text consulted in this work makes any mention of the use of artificial aids to navigation during these Phoenician voyages.

A ship sailing from Tyre to Gadir would have two main options: a northern route or a southern route along the North African coast. The second of these is very unfavourable because the prevailing currents are almost all west to east. Thus, it is assumed that the first port of call would be in Cyprus at the Phoenician settlement of Kition established in 900 BC. After passing around the south of the island, they ship would make contact with the southern coast of Turkey and three possible ports lay ahead at Phoinike (modern Finike), Phoinix in Caria, or Lydia, facing the island of Rhodes. Next port of call was probably Kithira, followed by Malta. By keeping to southern Sicily and Sardinia, the ship would avoid headwinds and adverse currents, whilst making for the island of Ibiza and southeastern Spain. Even today, passing through the Straits of Gibraltar can be problem because of the narrowness and because the currents and winds are predominantly from west to east. In particularly difficult conditions, ships could be delayed for many weeks here, while they awaited the abatement of the wind and sea conditions. They frequently sheltered along the coast of southeastern Spain. In some cases it was even necessary to disembark at Malaga and make a nine-day return trip overland to Tartessos. The reverse route from west to east was not as difficult and by following the north coast of Africa it was easy to reach Carthage and Utica. From there the route to Tyre was straightforward via Egypt [9].

An important conclusion from this discussion is that the natural sea routes were extremely well worked out by the Phoenicians, with a series of logically positioned and strategic settlements that formed a very strong commercial and powerful presence in the entire Mediterranean. Great navigators though they were, absolutely no evidence can be found that they ever used artificial aids to navigation. Indeed, it could be argued that with such expert knowledge of the Mediterranean and the skills to navigate it, the Phoenicians never felt the need to devise any aids to navigation other than the natural features they had been using for a thousand years. They knew that they were operating in a sea with known limits in all directions and that no matter if they lost sight of land they would come across a recognisable feature on land sooner or later.

Deep-sea voyages were obviously made. Navigation at night was based on use of the “Phoenician star” – the Pole Star - in Ursa Minor, and this was recognised by other cultures applying the name ‘Phoenike’ to the Ursa Minor constellation. Thus, the Phoenicians were excellent celestial navigators too. They occasionally travelled farther afield. For example, it is generally accepted that they did complete the first circumnavigation of Africa around 600 BC. Besides finding the Azores, distant settlements in West Africa, possibly in Senegal or Cameroon probably resulted from voyages by Hanno. The Carthaginian Himilco is reported to have sailed as far as the Cassiterides (Isles of Scilly, England) in search of tin around the 5th century BC. Such distant forays beyond the Mediterranean and the immediate Atlantic Ocean are considered very rare, even for such excellent navigators.

Along with sophisticated ships, the Phoenicians developed a clever strategy for their ports. Their eastern Mediterranean homeland harbours were always developed around natural features that were common in that region and particularly suitable. Thus, reefs, small islets and natural promontories were utilised to the full such that the best access between ship and land was obtained and the greatest amount of shelter from inclement tide and weather conditions was afforded at all times. When it was not possible to moor directly to the shore, ships could ride offshore, but this was not ideal because of the need to transfer goods in smaller boats. In the western Mediterranean, the geographical features were not always so favourable except at Gadir, Malta and Motya, all of them island ports. When the coast was steep, ships could get close and gangplanks could be set up from the prow to the shore. If the slopes were gentler, it was not so easy to get close to the shore. In southeast Spain, conditions proved to be especially favourable in a number of places and ships were able to get easy access to the beaches. Not surprisingly, this was a popular area for Phoenician settlement.

“It was the Phoenicians who were the first to erect a tower carrying a hearth on its summit; this first lighthouse in history was built at Cadiz, probably in the 4th century BC. However, this structure has not left the least trace in the texts that we know of.”

However, we have no indication of the source of their evidence for this conclusion. In a similar vein, Hague [23] writes:

“There was a strong tradition that the lighthouse of Cadiz was built by the Phoenicians, and it has been suggested that the circular Roman one, destroyed in the seventeenth century, was actually the reused Phoenician tower.”

It may be true that the Phoenicians did build such a tower there at some point in history, and it is possible that this was the first lightstructure. However, we have absolutely no idea when this might have taken place. It could have been at any time between the questionable date of first founding of the city, 1110 BC, or the later date around 850 BC and the end of the Phoenician influence around 100 BC.

The Phoenicians almost certainly did build another lighthouse much later in the mouth of the river Guadalquivir to the north. Strabo, writing in 20 BC, described a pharos at Caepio in Spain, the forerunner of the present lighthouse of Chipiona. He wrote that it stood on a rock washed on all sides by the sea and resembled the Pharos of Alexandria. He said that this beacon preserved vessels from the sunken rocks and shallows at the mouth of the river Guadalquivir [24]. This is a very early report of a rock-based, rather than a land-based, lightstructure.

Some writers discuss the presence of a lightstructure at Carthage. Again, it is possible that, if this lightstructure predated a similar one a Gadir, then the first lightstructure was built here. This is a speculative conclusion for the Romans comprehensively destroyed the city and there is no firm evidence that the Phoenicians engaged in the building of lightstructures. However, Hague [23] states:

“...re-excavation of the harbour at Carthage has brought to light the lower courses of an octagonal building 123 m across with walls about 2 m thick. The only details of the structure found were fragments of marble columns which it was thought might have formed part of an open lantern or similar feature.” 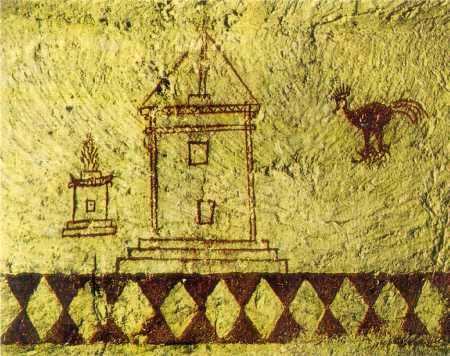 It could be argued that this is not, in itself, sufficient justification for the conclusion to be drawn. Historical evidence suggests that if lighthouses were part of a culture then they would appear somewhere in the writings and artefacts of that culture. The Phoenicians invented the alphabetic language and were well versed in art, yet we find no representations of lightstructures amongst their writings or artefacts. There are many images that are considered to represent lighthouses in the cultures of the Greeks and the Romans, but there is nothing similar assigned to the Phoenician or Punic culture. Roman coins often featured both ships and lighthouses. Although Phoenician coins do show ships, there is nothing yet found that can be identified as a lighthouse. Guzzo [12] describes one painting on a wall of 4th-3rd century BC tomb near Kerkouane in Tunisia as showing an object which does bear a striking resemblance to a pharos, as depicted in many other Roman and Hellenistic objects. However, she identifies it as an ‘altar’, and there is certainly much evidence of the use of ritual sacrifice in the Phoenician culture to justify this interpretation. There is no obvious marine context for the lighthouse interpretation.