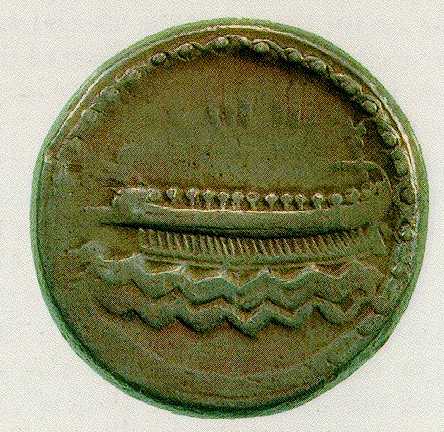 Fig. A14: An ancient Phoenician coin

The legendary story of the founding of Carthage has been recounted in many books. It concerns a woman called Elissa who many believe is the same person as Dido, the subject of a well-known poem by Virgil. Elissa was sister of Pygmalion, the king of Tyre, which was the ‘capital’ of the Phoenician homelands. In 814 BC, Pygmalion was assassinated and, fearing for her own life, Elissa fled Tyre and eventually arrived in northeastern Tunisia. She sought land to establish a base, but finding that negotiations were not to her advantage, she reportedly played on the innocence of the local people by asking for a piece of land that was big enough to be enclosed by the edges of an ox hide. Thinking that this would be very small, the locals agreed. Then Elissa cut it into narrow strips, laid them end-to-end and formed a huge circle. She had created enough land inside the perimeter of the ox hide to build a city, and that city, which she named Carthage, was to become one of the most influential in the entire Mediterranean region for almost 700 years.

Carthage was intended to be a permanent, lasting settlement, rather than a simple trading centre. It was perceived that a base in the central Mediterranean area was needed where it was remote from the oppressive intentions of other groups on the Phoenician homeland in the east. This idea of the formation of permanent towns is clear from the foundation of Carthage. We might therefore conclude on this basis that there is little or no possibility that lightstructures, as themselves permanent constructions, existed in the Phoenician culture before the foundation of Carthage.

As the culture and civilisation of Carthage grew over hundreds of years, the people of Carthage became identified as the Punic people, rather than Phoenicians. Eventually, Carthage became embroiled in two terrible wars with Rome known as the Punic Wars. Both were essentially fought over the land occupied by the Carthaginians in Sicily, which had been used as a staging post on the long east-to-west voyages.

The first war, from 264 - 241 BC, was a series of successes and reversals. At first the Carthaginians were far better at sea and could beat the Romans easily, but the latter soon learned from their mistakes and eventually, the Carthaginians were defeated. The peace terms were harsh and they lost their land in Sicily. Furthermore, sufficient damage had been caused to their nation that they never really recovered. They had control over most of southern Spain, thanks to their general Hasdrubal. When he was assassinated in 221 BC, Hannibal, another great general, succeeded him. Commencing the second Punic war in 218 BC, he led his army, including many elephants, from Spain across the Pyrenees, Gaul and the Alps to attack the Romans in Italy. After a series of successes, the initiative fizzled out. The Romans gathered strength and finally in 204 BC Scipio crossed to Africa and, after enlisting the help of the Numidians, defeated Hannibal in 202 BC at Zama. Hannibal was forced into exile and eventually committed suicide, as the Carthaginian subjugation became more severe.

A third and final confrontation occurred with Rome during 149-146 BC and this resulted in the almost complete destruction of Carthage. The legacy of the Punic culture, however, remained amongst the North African peoples for centuries afterwards [13].

The existence of Phoenicia as a free country in the east essentially came to an end with the victory of Alexander over the Persians in 333 BC. With the exception of Tyre, the Phoenicians welcomed him with open arms and Tyre was subjugated soon afterwards. Thus, the Phoenicians in the east were largely subsumed into the Hellenistic culture spread by Alexander and based in Byzantium.