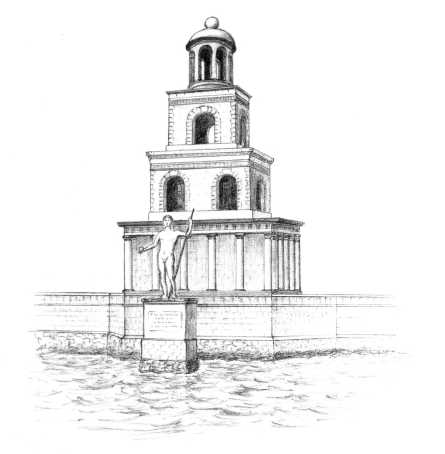 The lighthouse at Ostia (Portus Romanus), as depicted by Zemke [3]

The Romans built many lighthouses and lightstructures, and greatly relied upon them in the expansion of their empire, but all that work occurred after the Pharos of Alexandria had been constructed. The Roman Empire was very much in the early stages of its ascendancy in 300 BC, and it seems that the first Roman lighthouse was not constructed until the time of Augustus or Caligula, around the time of the birth of Christ at such locations as Ostia, the port of Rome, or Capreae, today known as the island of Capri. Therefore we quickly conclude that the Romans were definitely not responsible for building the first lightstructure.

The contributions of the Romans to pharology will be discussed in another article, but before we dismiss their lighthouse building so summarily, some additional comments should be made. Lightstructures feature prolifically throughout the artefacts of Roman civilisation, no matter where they are located. They can be found on a great many coins, mosaics and bas reliefs, as well as in all other forms of painted art and decoration. We conclude therefore that the concept of a lighthouse was deeply embedded in the Roman psyche. But the Roman culture was very much derived from the principles and practice of the ancient Greeks, and as we shall see below, it is entirely natural to accept that the earliest authors of Greek and Roman literature based their writings on events that have at least a small element of fact contained within them.