A01: Lighthouses of Antiquity: An Introduction 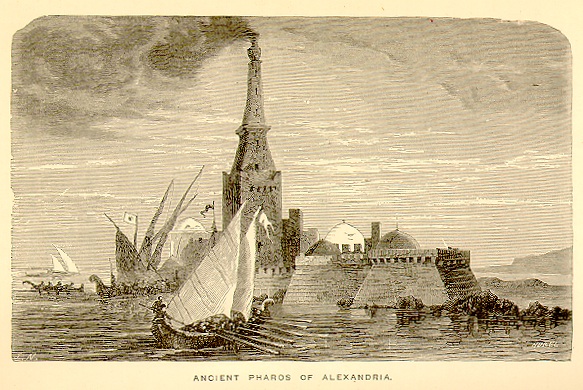 The aim of this paper is to consider the answer to the question, “Who built the first lightstructure?” (The terms used to describe navigational aids conform to definitions used across this website.)

We should first ask if the question is sensible and is likely to have an answer.

It is clear that geographical features have acted as navigational aids, whether on land or at sea, since the dawn of mankind. Active volcanoes such as Etna, Vesuvius and Stromboli in the Mediterranean would have provided the model since humans first ventured onto the sea, but we are interested here in deciding who created the first artificial aids for navigation at night.

Imagine a primitive culture of shore dwellers with sufficient technology to build a boat, raft or canoe, for example. Imagine also a small village at night, with a number of fires burning on the ground. These would have provided light for getting around the village in the darkness. Three situations can be envisaged.

In the first, a boat at sea steers towards a fire that is not intended to act as a beacon. There is no link between the setting of the fire and the homing of the boat, but a navigational aid exists nonetheless. Any small boat that happened to be returning to the home village after dark would be able to find it easily by heading in the direction of the fire. This is just the same as steering towards some known geographical feature in daylight.

In the second situation, a boat steers towards a fire that is intended to act as a beacon. This is the deliberate establishment of a primitive navigational aid. We must assume that any group of coastal dwellers having the capability to sail on the seas would also realise the value of a navigational aid and quickly move from situation 1 to 2. However, we must not jump ahead too quickly in our assumptions for it could have been a very long time before such primitive peoples ventured onto the sea at night. This argument would put the establishment of navigational aids later, rather than earlier, in history. We must also accept that we will probably never have any historical confirmation of this because it occurred too early in the history of human evolution.

In the third situation a boat steers towards a fire that is set on a purposely-constructed elevated platform. This situation represents not only the establishment of a beacon, but also a lightstructure.

We are left with the question as to when the first lightstructures were built. Since they were inevitably primitive, lit by fire, and very different from what we would build today, the distinction between a lightstructure and a lighthouse is rather pointless in this discussion. However, we will attempt to use the terms consistently. We thus conclude that the question posed is sensible and that we may be able to arrive at a possible answer, albeit one that cannot be proven.